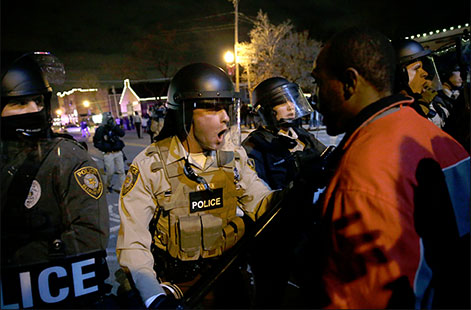 “I am sick and tired of being sick and tired.” Fannie Lou Hamer, iconic Mississippi civil rights activist and organizer, uttered her now transcendent words on August 22, 1964, testifying before the Credentials Committee of the Democratic National Convention.

After being nearly beaten to death in a Mississippi jail for simply trying to register to vote, Hamer eloquently captured the frustration, disappointment, and anger that she felt. People of conscience must feel after the Ferguson grand jury failed to indict Officer Darren Wilson earlier this week for killing Michael Brown, an 18 year-old, unarmed Black man, on August 9.

A Black male is killed by a law enforcement officer in this country every 28 hours. Most are unarmed teenagers. Rarely does the officer(s) get either indicted or convicted of any crime. Arguably, if males from any other racial or ethnic group were being choked, shot, or tasered to death at the alarming rate that Black males are, police departments nationwide would be revamped and a state of national emergency would have long been declared.

The corporate media characterizes young Black men as menacing and dangerous. This fuels incendiary statements, such as Officer Wilson’s, when he said, “…he (Michael Brown) looked up at me like a demon.” It is pathetic that murderers are given immunity because they express fear at the presence of large, and, or, hooded Black males.

The grand jury process in state and federal courts routinely provides a rubber stamp for prosecutors to indict suspects, even if evidence is flimsy, except when the police are involved. As a matter of fact, the Bureau of Justice Statistics reports that out of 162,000 federal cases, only 11 cases received a “no true” bill from the grand jury. Although statistics are unavailable for state cases, the outcomes are similar.

It was clearly apparent that Ferguson prosecutor Robert McCollough went to extraordinary lengths to act as a defense attorney. He presented evidence that would cast reasonable doubt as to Officer Wilson’s guilt, rather than provide, as is the prosecutor’s job, evidence of probable cause to why he should be indicted. In light of the immediate public outcry after Michael Brown’s murder, the judicial system and McCollough should have felt acutely obligated, legally, morally, and socially, to be as transparent as possible and maintain at least the appearance of justice.

The murder of Black males by police officers must be understood from the broader perspective of structural racism in the United States. Structural, or institutional, racism permeates multiple layers of society, including the courts, the police, and the prison-industrial complex. The American population constitutes approximately five percent of the world’s population, yet it incarcerates 25 percent of the world’s population. That is 2.4 million people – a majority of whom are Black and Hispanic.

When it comes to issues of legality, a blind eye is turned to the security establishment. It is legally inexcusable for protestors in Ferguson to commit crimes against property or persons. It is also unacceptable for police, National Guard, and sheriff departments to employ military-grade weapons against peaceful protestors. Yet that is exactly what happened following Brown’s murder.

Commenting on a similar situation in the 1960s, Dr. Martin Luther King, Jr. said, “It is not enough for me to stand before you tonight and condemn riots. It would be morally irresponsible for me to do that without, at the same time, condemning the contingent, intolerable conditions that exist in our society. These conditions are the things that cause individuals to feel that they have no other alternative than to engage in violent rebellions to get attention. And I must say tonight that a riot is the language of the unheard.”

When will we raise our collective voice and say, “We are sick and tired of being sick and tired” of the murder of Black youth by law enforcement with seeming impunity; of Black males being sent to prison for extremely lengthy sentences for non-violent and first-time offender crimes; of institutionalized racism in our society? The time is now.