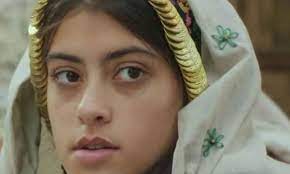 Farha is a film about the story of a young Palestinian girl during the events of the Nakba in 1948. The film is historical fiction, based on the true stories of Palestinians forced to flee their homes and communities as Israeli forces took over Palestinian land. The film follows Farha as she is forced to hide in a kitchen room, locked in while she watches the atrocities of the Nakba through a hole in the wooden walls.

The film has been met with much acclaim and success, but as always, any Palestinian story is met with the Israeli lobby, which has been unsuccessful in its attempt to force Netflix to remove the film. The film was accused of being anti-semitic, and condemned by Israel for inciting hatred against the Israeli Defense League.

Many Palestinians have argued against this claim, and have expressed that the film is a mild portrayal of the Nakba. The director, Darin J. Sallam, recounts that the story is based on the events of a story she heard in her childhood, that of a girl named Radieh. The Nakba, meaning catastrophe in Arabic, is when Israeli soldiers continued in their ethnic cleansing of Palestinians. On the day of the Nakba, May 15, the Zionist state of Israel was established in a violent process that displaced, expelled, and killed hundreds of thousands of Palestinians from their homeland. From 1882 onwards, thousands of Eastern European and Russian Jews started settling in Palestine, pushed by pogroms they were facing in Europe and Russia. Zionist immigration to Palestine was facilitated by the British. These settlers displaced Palestinian families, who revolted against the British and Zionist. However, with British support, Israeli forces were able to establish themselves and enact the events of the Nakba, a total takeover of Palestinian society.

The Israeli lobbies’ attempts to silence and dehumanize Palestinians are a part of the ongoing settler colonialism and apartheid that frames the Israeli state. This is not new, but it is a part of the exact textbook of genocide and ethnic cleansing. The denial of the Nakba by Israeli officials to claims of anti-semitism are simply a way to silence Palestinian voices.

Farha is then not just a story of one girl, but it is a reality that Palestines face, and continue to reel from. The Nakba was a catastrophe that destroyed the fabric of Palestinian society and kick-started the apartheid state of Israel that we see.