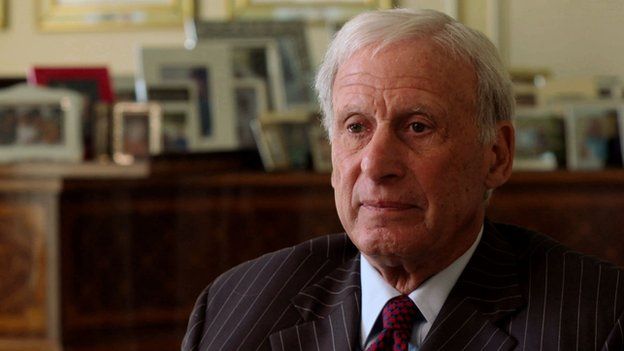 The CIA tortured terror suspects in its programme of “enhanced interrogation”, the agency’s former executive director, Buzzy Krongard, has admitted to the BBC’s Panorama programme.

The agency’s position has always been that the “enhanced interrogation” techniques it used under George W Bush, did not amount to torture, because they were legally approved by the White House at the time.

President Obama closed the CIA’s programme down when he came to power in 2009.

Torture is illegal under American law, but President Obama has been reluctant to

Torture is illegal under American law, but President Obama has been reluctant to prosecute high level officials.

Under the CIA’s programme at least 119 detainees were held in a network of secret prisons scattered around the world. In one of the black sites codenamed COBALT, the windows were blacked out so that it was utterly dark, and some detainees were chained to the walls of their cells for months on end.

I asked Buzzy Krongard, the CIA’s former executive director, if he thought waterboarding and painful stress positions were torture:

“Well, let’s put it this way, it is meant to make him as uncomfortable as possible. So I assume for, without getting into semantics, that’s torture. I’m comfortable with saying that,” he explained.

The position of senior CIA officials involved has always been that the “enhanced interrogation” techniques used under President George W Bush were not torture, as they were legally approved by the White House at the time.

One detainee, Abu Zubaydah, was described by the White House as a key terrorist recruiter connected with Al Qaeda. Captured in Pakistan in 2002, he is currently in US detention in Guantanamo Bay, Cuba.

Abu Zubayadah was held in a box measuring less than three feet by three feet, for 29 hours over a 20-day period in 2002. The box, which soon becomes stiflingly hot, is too small to do anything but crouch, with an arched back.

He was also held in a larger upright box, the shape of a coffin, for a total of 266 hours, or more than 11 days.

The CIA took its interrogation techniques from the United States military programme known as SERE – Survival, Evasion, Resistance and Escape – which teaches soldiers how to resist torture techniques used in the conflicts in Vietnam, Korea and Nazi Germany.

Malcolm Nance, former military instructor for the SERE programme, recreated the techniques the CIA adopted, for the BBC.

“These close confinement boxes were used by the SS,” Nance explained. “They would stuff these British and American agents into them and drive them mad.”

The use of close confinement was banned by the Geneva Conventions after World War Two.

Nance conducted the waterboarding procedure for the BBC, the first accurate recreation of the technique in public. His assistant endured 18 seconds of the procedure under strict medical supervision, his body violently convulsing as the water entered his nose. Waterboarding puts the subject into the initial stage of drowning.

A report by the Senate Select Committee on Intelligence released last December highlights a number of unauthorised interrogation techniques that were also used on detainees in the CIA’s secret prisons, including excessive beatings, and ice water dousing and baths.

In a public rebuttal to the Senate committee’s report, the CIA has admitted to significant lapses in the monitoring and development of its initial interrogation activities, including instances of using unauthorized techniques.

Another detainee is Khaled Sheikh Mohammed, who is said to have admitted to organising the 9/11 attacks on the United States. He was arrested in Pakistan in 2003 and is also currently being held at Guantanamo Bay,

The most severe part of his interrogation at the hands of the CIA went on for more than two weeks in March 2003. He was subjected to walling, waterboarding, sleep deprivation and other techniques around the clock.

The BBC was told that Britain shared in intelligence directly from his interrogation.

“Anything that we thought the Brits would be interested in and particularly represented a threat, I guarantee you was shipped out.” said Mr Krongard,

“I can’t think of two intelligence services working in a more harmonious or closer matter and that I think, had a lot to do with the relationship at the top,” he added.

Asked if British intelligence knew that “enhanced interrogation” techniques were going to be used in interrogations, Mr Krongard replied: “It’s hard for me to think that they didn’t, they’re professional intelligence people, I mean obviously,”

And, asked to respond to the allegation that intelligence was shared from torture sessions, the Foreign Office said “We stand firmly against torture and cruel, inhuman and degrading treatment or punishment. We do not condone it, nor do we ask others to do it on our behalf.”