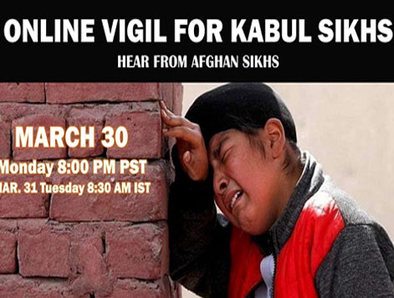 ICNA Council for Social Justice co-hosted an online Interfaith Solidarity Vigil for Kabul Sikhs on March 30th, 2020. The vigil was joined by many community leaders, activists, social workers and well-known Afghan personalities from USA, Canada, Afghanistan and other parts of the world.

More than two dozen people were killed after an attack on a Sikh place of worship in Kabul on March 25th, 2020. The attacks were condemned by several governments and NGOs worldwide.

During the panel Waqas Syed, Director CSJ-CA said “These attacks are appalling. We extend our condolences to the families of the victims. Our thoughts and prayers are with them in this difficult time. We also urge the Afghan government to bring the perpetrators to justice.”

“We remind those in authority in Afghanistan of their duty with the following verse from the Quran:
‘And were it not that Allah checks the people, some by means of others, there would have been demolished monasteries, churches, synagogues, and mosques in which the name of Allah is much mentioned. And Allah will surely support those who support Him. Indeed, Allah is Powerful and Exalted in Might. [22:40]’.
Other panelists from the Jewish and other communities also spoke about the sense of service among the Sikhs worldwide and the danger to all communities from extremism. Dr. Muzammil Siddiqi spoke about how these acts are unislamic and go against the interests of Muslims and Islam.

Syed offered Muslim community’s services to help any Afghan Sikhs who come to US as well as advocating for the rights of Sikhs in US.