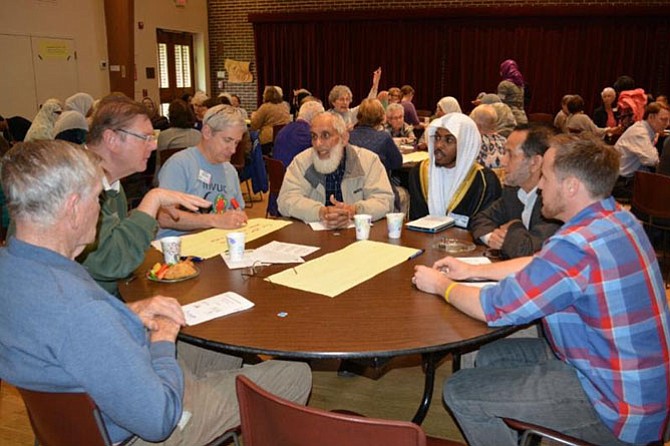 Nearly 100 members of the Mount Vernon Unitarian Church (MVUC) and the northern Virginia chapter of the Islamic Circle of North America (ICNA VA) came together in friendship and cooperation to address the growing issue of Islamophobia in American society at a meeting on Saturday, May 21, at the church, 1909 Windmill Lane, Alexandria.

Over the past several months, the national political debate has given rise to proposals to bar Muslims entering the United States, to carry out active surveillance of the Muslim community, and to a general atmosphere of religious intolerance.

The event was designed to develop a clearer understanding of the current situation and for MVUC and the ICNA VA mosque to work together to jointly develop approaches for fostering interfaith understanding and tolerance. The church and the mosque are a 10- minute drive apart in the Hollin Hills-Hybla Valley area of the Mountt Vernon District of Fairfax County.

The event was kicked off by Kate Walker, minister of MVUC, and Imam Yasir Siddig of the ICNA VA mosque. The keynote speaker was Corey Saylor, an expert on political communications, legislative advocacy, media relations and anti-Islam prejudice in the United States. Saylor directs the Department to Monitor and Combat Islamophobia at the Council on American-Islamic Relations (CAIR).

After Saylor’s presentation, members of the MVUC congregation and the ICNA VA mosque developed several proposals to work together to improve interfaith cooperation and understanding in the Mount Vernon area.