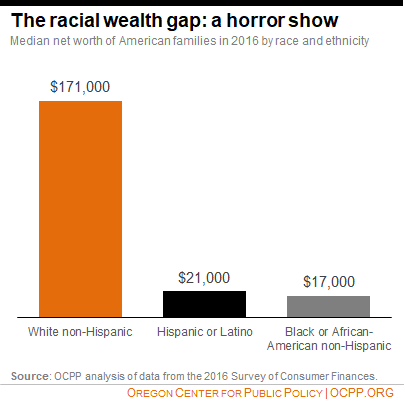 The Covid-19 pandemic has quickly surged into a crisis that is as unprecedented as it is destructive. The virus, which began as an international health emergency, has caused an economic downturn that has rocked the globe. Millions of people in the United States alone are left without work, and the service industry and the gig economy have been effectively imploded. There is no sign of a return to normalcy. Like all crises, the COVID-19 pandemic has highlighted the cracks in the social structures, disproportionately affecting communities of color and those which are economically disenfranchised. Black and Hispanic people living in the United States are more likely to come from lower socioeconomic backgrounds, due to years of segregation in education, employment, and housing policy. These policies have led to a gaping racial wealth gap, which is debilitating in all aspects from health care to housing. After this pandemic is over, the data will show that the gap has increased even further when taking into account that most of the deceased, afflicted, and those who have lost their jobs, are all more likely to come from Black, Hispanic, and low-income households.

To shed some light on this issue, the Urban Policy Institute held a program on Wednesday, August 12th to discuss the problem and highlight some possible policy responses. Senator Cory Booker of New Jersey spoke about his bill, The American Opportunity Accounts Act, also known as the Baby Bonds Bill, which he introduced in 2018. Booker takes into account the racial hurdles his family had to overcome to secure housing in his neighborhood in New Jersey, and reflects on the necessity for wealth accumulation for security and stability, especially in times of crises. The Baby Bonds Bill is also known as Senate Bill 3766, and outlines a plan to start an account of 1000 USD to every child born in the United States. The account would continue to accumulate a sum of money every year, based on the economic status of the child as determined by his parent’s tax returns. Children born into wealthier families may not qualify for the additional yearly sum, which could reach anywhere up to 2000 USD, but would qualify for the interest returns on the sum of the account every single year. The account is locked until the child’s 18th birthday, after which the account could be used for approved uses. The approved uses clause allows the account to be used only for payments in regards to expenses related to homeownership, education, and other similar situations, allowing people from lower economic subgroups to benefit from the privileges that homeownership and education can bring. In 2019, Congresswoman Ayanna Pressley introduced a companion, HR 3922, in the house, where the bill accumulated 20 cosponsors.

The Urban Institute has published numerous studies analyzing the impact of the Baby Bonds Act. Some say that this additional fund can help to close the gap between White and Black wealth accumulation in the United States by a significant amount. Booker’s analysis suggests that the average Black Child in the United States will be able to receive nearly 30,000 dollars at the age of 18, that can be redeemed to pay for a college education, to put a downpayment on a house, or even to start a retirement fund. These are infinitesimally important steps to closing the wealth gap in a country where the average Black and Latino family can only afford to rent a house, essentially throwing money away that can be used to build equity. A college education is also expensive and has gotten exponentially more expensive. Alongside the effort to make the cost of a college education more affordable for all, these bills could help carve a middle ground, making college more attainable for those that may find costs associated with higher education out of their reach. Bills, however, are only as strong as the support they have from constituents. This is the nature of a democracy, in which the people’s voice is the driving factor behind the rule of law. The Baby Bond Bill relies on the support it receives from the people.