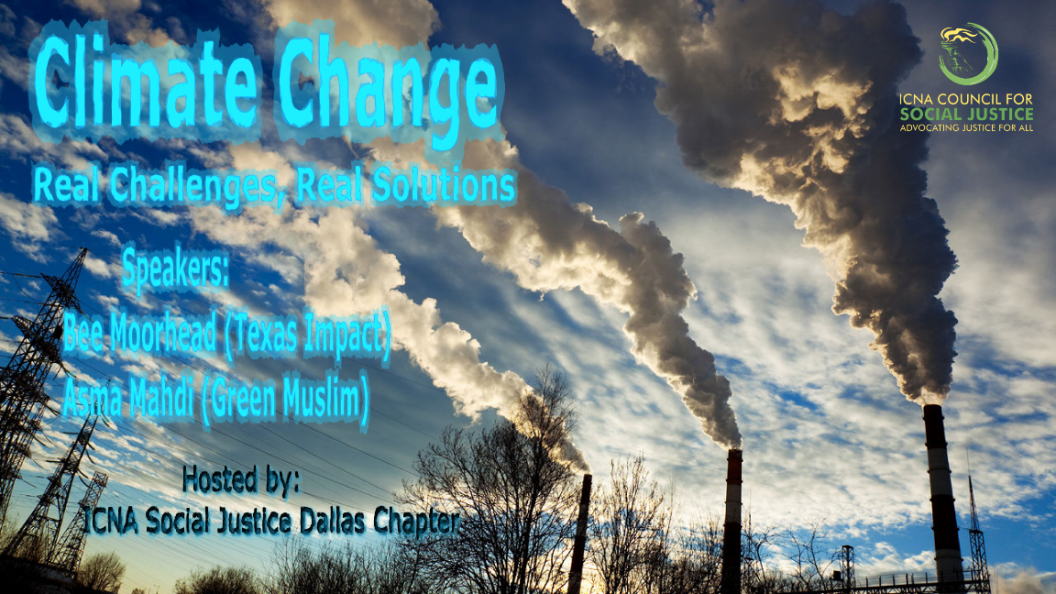 On January 30, 2016, ICNA Council for Social Justice, Dallas hosted a webinar on Climate Change: Real Challenges, Real Solutions. The video of this session is provided at the end of this article.

Ms. Bee Moorhead and Ms. Asma Mahdi were the presenters. Ms. Moorhead is the Executive Director of Texas Impact. Ms. Mahdi is a former Board Member of GreenMuslims.org

Br. Obaid Siddiqui, ICNA Dallas Board Member, introduced the objectives of ICNA Council for Social Justice. He spoke about verses from the Quran that explain the signs and Mercy of Allah that teach us to respect our environment, create a balance in our lives and thus establish justice.  He mentioned hadiths (sayings) of the Prophet Muhammad (peace be upon him) about conserving resources like water and protecting trees that are some of the many blessings provided to us by Allah; and by doing so we will be showing our gratitude to Allah.  He also mentioned that ICNA Dallas is a member of Texas Impact.

Ms. Moorhead spoke at length about global warming and climate change, about why scientists think climate change is happening and why it is a problem. Global temperatures have risen from 13.4 degrees Celsius in 1881 to 14.5 degrees Celsius in 2010.  90 percent of the extra heat trapped by manmade global warming pollution goes into the ocean.  The same extra heat that evaporates water from the ocean pulls moisture even more quickly from the soil.  Thus we have seen hotter years with typically more fires. Disruptions in global systems have led to political and societal instability, affecting food and water supply, global health and infrastructure.

This has led to the formation of the COP, which is a Conference of Parties that governs the international environmental treaty called the United Nations Framework Convention on Climate Change (UNFCCC).  The UNFCCC does not set internationally binding limits to greenhouse gas pollutants or include enforcement mechanisms. Instead, protocols and other legal instruments are negotiated to set limits and establish rules. At the COP21 in Paris last year, negotiators created a framework to reach UNFCCC’s objective of stopping climate change.

Faith based organizations are increasingly putting climate change on their agenda. Nationwide, there is Interfaith Power & Light, a religious response to Global warming.

Ms. Asma Mahdi, of GreenMuslims.org, also attended the COP21 in Paris.  Br. Colin Christopher of Green Muslims had also presented a session at the ICNA conference in Baltimore, Maryland, on May 23, 2015.

On the webinar, Ms. Mahdi presented ideas of how we can all make a difference.  She spoke of restricting our consumption of water when doing Wudu, educating our youth about “Our Deen is Green”, encouraging our imams to give Green Khutbahs, having Green Deen events like Zero Trash iftaars and parties.  Other resources on the Green Muslims website are Green Khutbah Guide, Zero trash kits, the Green Ramadan toolkit and other resources.

The webinar was well attended.