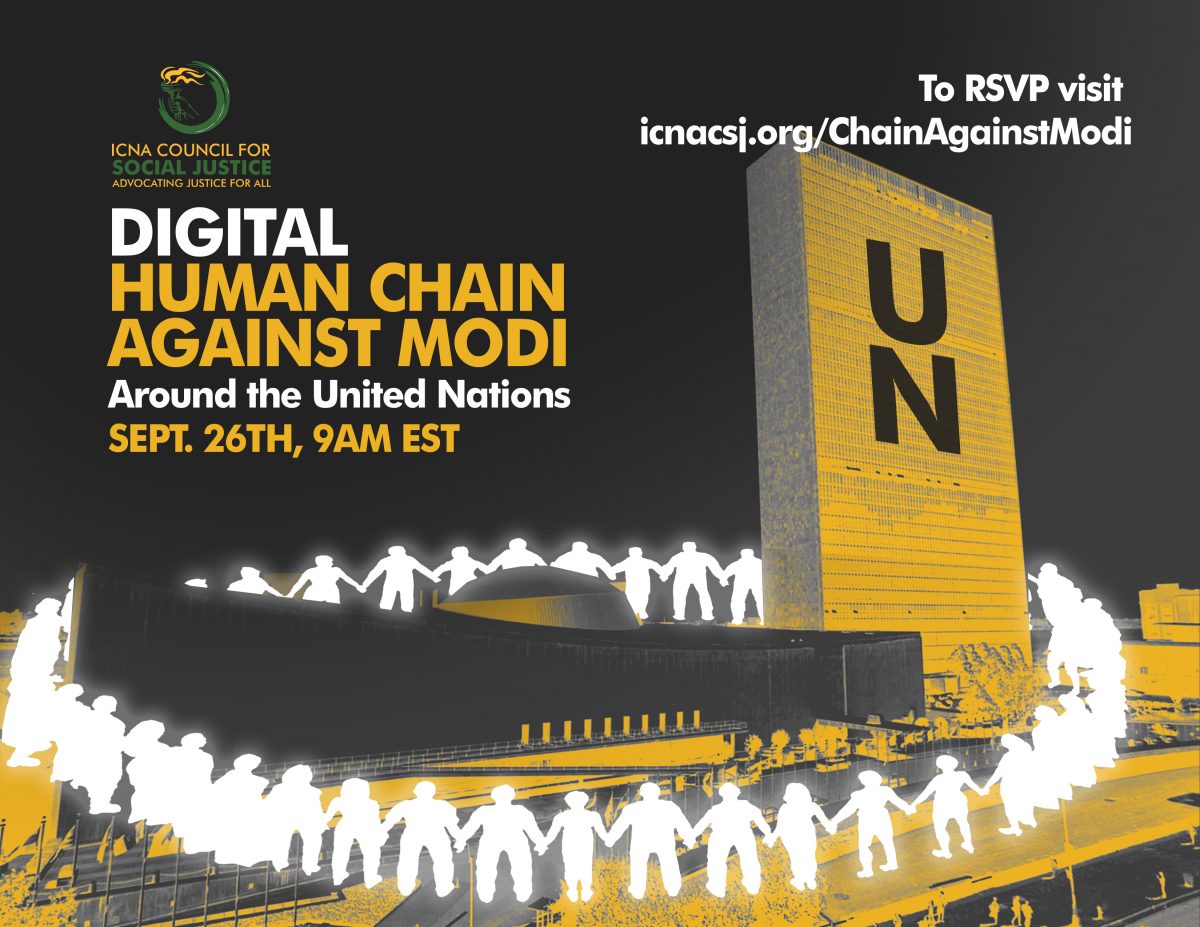 Join the Chain By Filling Out the Form Below

Mr. Narender Modi, the Prime Minister of India, will be speaking online to the UN 75th General Assembly session on September 26, 2020, at 9:00 AM (EST). His government has wreaked havoc on pluralism, democracy, and human rights in India since his party, BJP, came to power in 2014. We are inviting all freedom-loving people to join the digital human chain around the United Nations to protest his brutal fascist rule in India.

The BJP (Bharatiya Janta Party), espouses an ultranationalist and supremacist ideology known as Hindutva. This virulent ideology (distinct from the religion of Hinduism) seeks to expand the existing hegemony of upper-caste Hindus. It also intensifies the ongoing horrendous persecution of Muslims, Christians, Sikhs, Dalits, moderate Hindus, and other communities in India, and relegate them to the status of second-class citizens.

The RSS (Rashtriya Swayamsevak Sangh) movement which is the fountainhead of the Hindutva ideology, is the real power behind the ruling BJP. The RSS founding fathers used to idolize Adolf Hitler. This movement has unleashed riots, massacres, and lynching on Indian minorities.

Gujarat Pogrom in which more than 2000 ppl lost their lives, and more than 200,000 were made homeless, took place under Mr. Modi’s watch. He was Chief Minister of the state at that time and he either looked the other way while people were murdered or actively provided protection to criminals for their crime. Indian Supreme Court called Mr. Modi’s government modern-day Neros. The USA revoked Mr. Modi’s visa for his role in the violence.

Modi government has systematically weakened and dismantled most democratic institutions. Be it media, judiciary, election commission, auditor general, or other governmental agencies.

His government on Aug 5, 2019, stripped limited autonomy of only the Muslim majority state of J&K (Jammu and Kashmir) in violation of UN resolution. Since then the state has been put in virtual lockdown causing immense harm to the local economy, fundamental human rights, and has attempted to change the demographics of land. HRW has documented serious human rights abuses in Kashmir since then.

Modi government also passed the CAA ( Citizenship Amendment Act) which specifically excludes Muslims from eligibility for immigration, UN Human Rights Chief called the Act ‘Fundamentally Discriminatory’. CAA in combination with another proposed law NRC (National Register of Citizenship) that would render 10s of millions of Muslims and other minorities stateless when implemented nationwide. NRC has been implemented in one of the Indian states, Assam, and it has resulted in putting almost 2 million people in legal limbo.

When Muslims along with civil society came on the streets protesting CAA and NRC, violence was unleashed against the Muslim population of Delhi from in the last week of Feb 2020, resulting in the killing of 53 people, mostly Muslims, and the destruction of shops, homes, and businesses of mostly belonging to minority community by supporters of BJP (Mr. Modi’s party) and police. Human rights organizations such as HRW, Amnesty, and international media have covered in detail how biased police have targeted Muslims and the biased investigation is framing the victims for the violence unleashed on them.

Let’s join hands and make the digital human chain against Modi a success!