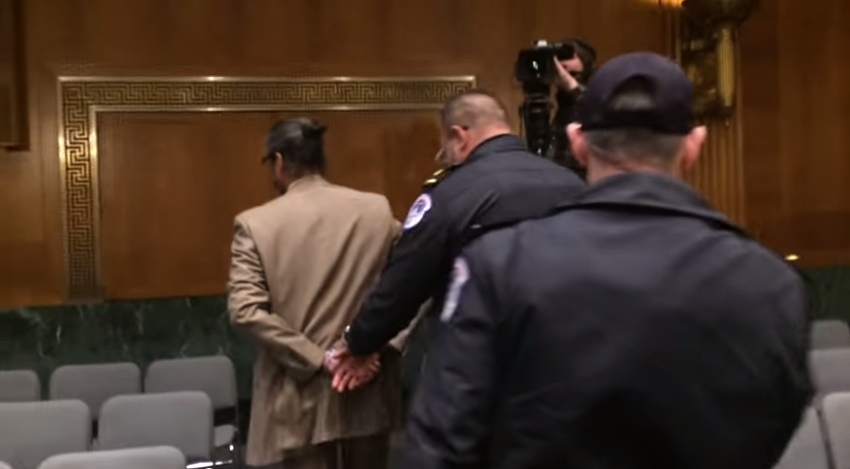 Washington, DC –– Shahid Buttar, Executive Director of the Bill of Rights Defense Committee (BORDC), was arrested on Thursday, February 26, 2015 after a Senate Armed Services Committee hearing with Director of National Intelligence James Clapper. Joining CODEPINK activists who protested during the hearing, Buttar approached Clapper after the hearing concluded to ask a question about America’s separate systems of justice.

Buttar particularly said (video): “In March 2013, you misled the Senate Intelligence Committee about the scope of NSA surveillance. What do you have to say to communities of color that are so hyper-policed that we’re subjected to extrajudicial assassination for selling loose cigarettes, when you can get away with perjury before the Senate? Why is your agency above the law, sir? …Why are you above the law for perjury and why is the NSA above the law for mass surveillance, even violating the contours that the authors of the Patriot Act intended to authorize in 2001?…[A]nd Senators, why won’t you do your job? You’re charged with oversight of these officials.”

Although the hearing had ended and Buttar was not visibly “demonstrating,” Capitol Police quickly escorted him out of the room.

Later, Buttar noted the remarkable irony pervading how he left the hearing. He said, “I asked a simple question of a public official in a public setting that no elected member of Congress has had the independence to ask: how can you lie to Congress and get away with it? It’s a disturbing sign of our draconian times that posing that question is an alleged crime, while Clapper’s lies to Congress remain unpunished and tacitly rewarded. Welcome to America!” He explained his actions at greater length here.

Founded specifically to fight the PATRIOT Act through grassroots organizing at the local level, BORDC challenges executive power abuses including mass surveillance, as well as torture with impunity, and arbitrary profiling according to race or ideology. BORDC supports an ideologically, politically, ethnically, geographically, and generationally diverse grassroots movement focused on educating Americans about the erosion of our fundamental freedoms; increasing civic participation; and converting concern and outrage into community action.