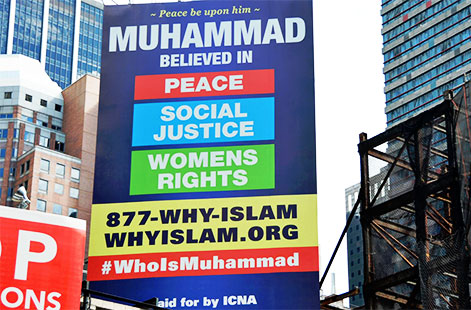 Texas Muslims, along with the rest of the American Muslims, have witnessed an increase in Islamophobia in 2015 starting with the protest in Garland Community Center in January until the recent protest in front of one of the oldest mosques in DFW, Islamic Association of North Texas, just this past Saturday.

To combat Islamophobia, ICNA Dallas has launched a “Best of Neighbors” campaign to respond to hate with love and mercy.

As part of this campaign, they have launched a billboard on I-35E, South of Dallas. Approximately, 400,000 people will view this billboard on a weekly basis. The billboard says, “Prophet Muhammad Believed in Peace, Social Justice, and Women’s Rights.” The billboard invites passers-by to call the toll-free number, 1-877-Why-Islam, or visit the website, www.WhyIslam.org to find answers to questions about Islam, Shariah, Jihad, Terrorism, Women Rights, or to order their free copy of the Quran or other literature in both English and Spanish.

In addition to the billboard, ICNA Dallas will engage the entire DFW Muslim Community in the “Best of Neighbors” campaign. ICNA Dallas through the help of the Muslim Community members will provide a simple gift to our neighbors The gift includes a nice steel coffee mug with goodies in them (hot cocoa, etc.) and with it we have a greeting card wishing our neighbors “Happy Holidays” along with a saying of Prophet Muhammad (peace be upon him), “He will not enter Paradise whose neighbor is not secure from his wrongful conduct.”

“Research shows that people who have Muslim friends have a higher favorable opinion towards Islam and Muslims and this campaign is intended to do exactly that – let’s get to know our brothers and sisters from other faith traditions,” said Riyaz Lareef, President of ICNA Dallas.