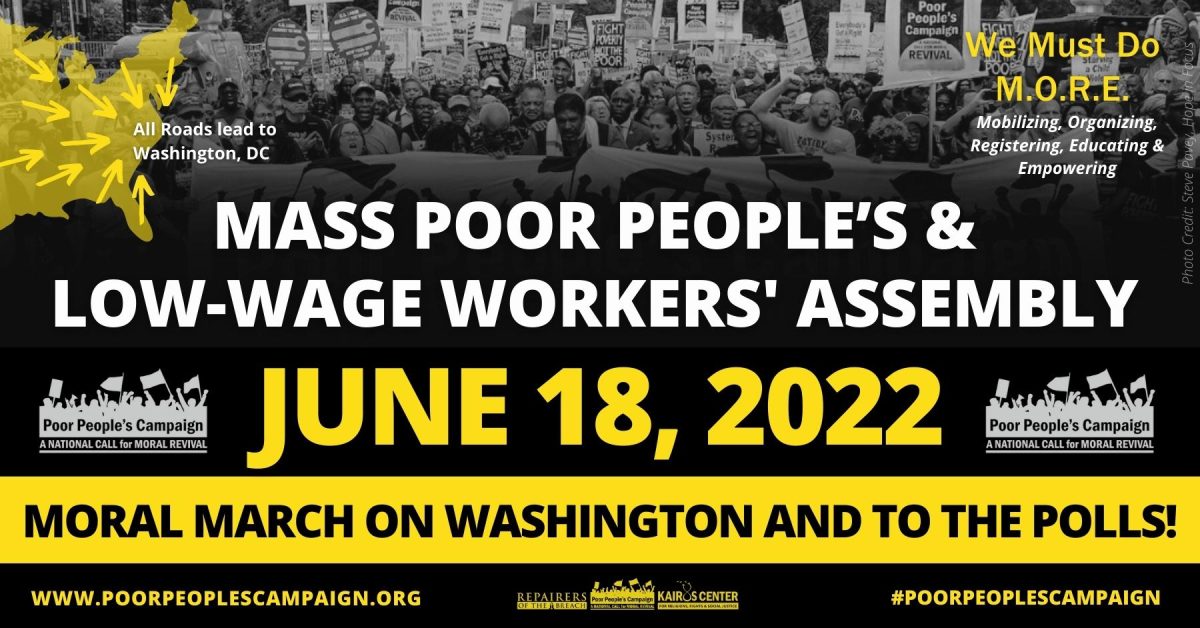 The June 18 Mass Poor People’s and Low Wage Workers Assembly and Moral March is the outgrowth of the fusion movement that grew out of the weekly Moral Monday demonstrations at the North Carolina State Legislature in North Carolina of which I was an active participant. The June 18 Assembly and March in Washington, DC is organized and led by Dr. Rev. William J. Barber, II, President of Repairers of the Breach and Co-Chair of the Poor People’s Campaign and Liz Theoharis, Director of the Kairos Center for Religions, Rights, and Social Justice. Dr. Rev. Barber is arguably the foremost leader of the modern-day civil rights movement today.

As Muslims, we are commanded by Allah subhanawata’la’s in the Qur’an: “Oh you who believe! Stand out firmly for justice (Be standard bearers for justice), as witnesses to Allah, even though it be against yourselves, or your parents or your kin, be he rich or poor, Allah is a Better Protector to you both…” Qur’an An Nisaa: 135

I am making a personal appeal on behalf of ICNA Council for Social Justice, a Mobilizing Partner of the event, for you to join us on June 18 in Washington, DC for the Mass Poor People’s and Low Wage Workers Assembly and Moral March as part of a broad coalition in response to the continuing pain caused by the relative neglect of the 140 million poor and low wealth people in this country. As Muslims, we are called to join other people of conscience from across the country to shift the moral narrative, build collective power, and demand a national agenda that can realize the potential that this nation holds for rich and poor alike. Together, we must challenge the lies of scarcity versus the gross monopolization of resources and the notion that nothing else can be done to relieve or eliminate poverty in this land. Join us in Washington, DC on June 18 in Freedom Plaza, Third and Pennsylvania Avenue NW at 9:00 AM for this history-making event.