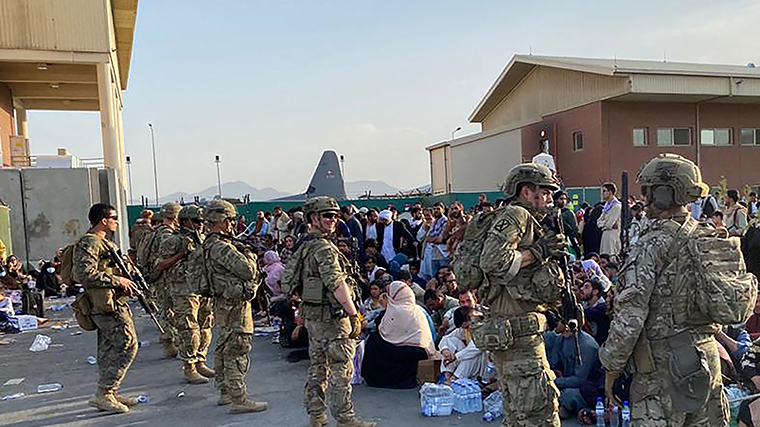 In the battle for imperialism, media from the West has had a history of creating images and propaganda that would attempt to gloss over actions by the West. To further clarify, in the current situation in Afghanistan, many news outlets, social media platforms, and individuals are proliferating images that would evoke empathy or compassion towards US soldiers. What must be understood, however, is that these images consistently play into soft propaganda of the US/overall West as saviors, compassionate beings, dedicated to service to humanity, when in reality, soldiers are a tool of the US mission for imperialism.

American soldiers are pictured holding babies and providing water for some children at the Hamid Karzai International Airport in Kabul, Afghanistan.

US Marines taking care of a Baby at the Airport of Kabul❤️❤️ pic.twitter.com/xd4ChokHmx

This image of a US marine holding a baby during an evacuation at Hamid Karzai International Airport in Kabul would suggest that US soldiers are helping Afghan civilians, when in reality, US soldiers were known for their exceptionally cruel treatment towards Afghan civilians – torture, killings of innocents, rape, and so on. These images thus, are an attempt to paint a different picture than what actually happened in Afghanistan.

The US invasion of Afghanistan occured for many reasons, but one of the main proponents of the invasion was the idea that Afghan women needed saving. Now, 20 years later, the Afghan woman remains in a country ruled by the Taliban. The US used Afghanistan as a playing field for imperialism, and now shares imagery that would imply the opposite. When looking at these images, we must be critical and nuanced in understanding what they imply. The baby in the arms of a US marine is an example of a cruel, unjust war, invasion, occupation. Rather than seeing this as a sweet moment, we need to understand what brought the Afghan mother to give her baby to a US soldier – two decades of invasion and imperialism have led to the erasure of the average Afghan, and has instead amplified the US soldier’s voice.

This is a challenging time for many veterans and their loved ones.

Know you are not alone. There are free mental health resources available. (THREAD)