It was early in the morning when my brother woke me up. He told me to get up as it was the time to watch the man we loved so much and still do.

TV was not common in Pakistan at that time. My father, on one of his European trips had bought one and got it shipped to Pakistan. It was a Philips brand, black and white. We quickly ate breakfast and sat in front of the TV to watch our hero, a super-hero, to sting like a bee and dance like a butterfly.

It was not a holiday and to our amazement our father, may Allah forgive him and have mercy upon him, allowed us to watch the game and then go to school. It never happened before or after that day.

We watched, Muhammad Ali, the heavy weight champion of the world, dancing in the ring and making us believe that all those punches being thrown on his body by his opponent did not hurt him. Today, I wonder if he did that to teach us something. For us he was a great Muslim champion from the tribe of Bilal ibn Rabah. Who also suffered greatly from the hands of his master when he accepted the message of Prophet Muhammad (PBUH). Was Muhammad Ali trying to repeat the history? Yes, he was also put behind prison because of his commitment to peace and justice. By coming back in the ring he taught us a great lesson just like his ancestor Bilal did.

Stand up for Justice.

I personally met Muhammad Ali a few times. First in 1989, when he came and joined us (ICNA Chicago) in the meat distribution drive after the Eid celebrations. Then I got a chance to visit him at his home in Michigan for an interview with the Sound Vision team. And, now, yesterday at a press conference in Washington, DC. 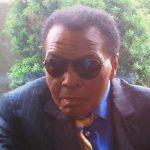 He still looked like a champion … a champion of Justice. May God, almighty, give him a long and healthy life.