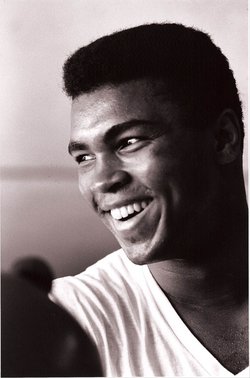 Muhammad Ali, formerly Cassius Clay Jr., learned and dedicated himself to boxing from a young age, setting himself apart by his determination. When he was 18, he began his journey towards the great title he currently possesses at the 1960 Rome Olympics, after being named Golden Gloves Champion in 1959. When Ali refused to enter the Vietnam War draft, he was stripped of his championship titles, passport, and boxing licenses. After a long battle, the Supreme Court finally ruled in his favor and he returned to boxing. After meeting Malcolm X and converting to the Nation of Islam, Ali became the Heavyweight Champion of the World in 1964. At the end of his career, he had claimed the Heavyweight Champion title a total of 3 times, and he used his mantle as a sports icon to preach for his beliefs and convictions. In 1984, Ali publicly announced he had Parkinson’s disease, and created and raised funds for his namesake Parkinson’s Center.