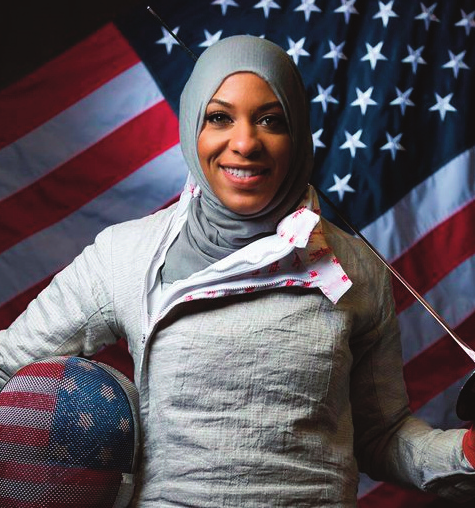 Ibtihaj Muhammad is an Olympic medalist in fencing who began her career as a fencer at the age of 13. She attended Duke University on a scholarship, and graduated in 2007 with a double major in international relations and African-American studies with a minor in Arabic. At the 2016 Olympic Games in Rio, Muhammad won her first qualifying round in the individual saber event, and went on to become the first female Muslim-American athlete to win an Olympic medal when she earned a bronze medal in the team sabre event. She has traveled the world for her profession, but also as a speaker at public engagements and conventions pertaining to sports and education. As an entrepreneur, Muhammad founded an online shop called Louella that offers affordable fashion alternatives for the Muslim market. Her success led to Mattel announcing that it was honoring Muhammad with the unveiling of a new Barbie doll in her likeness, the first doll in Barbie’s history to come with a hijab.