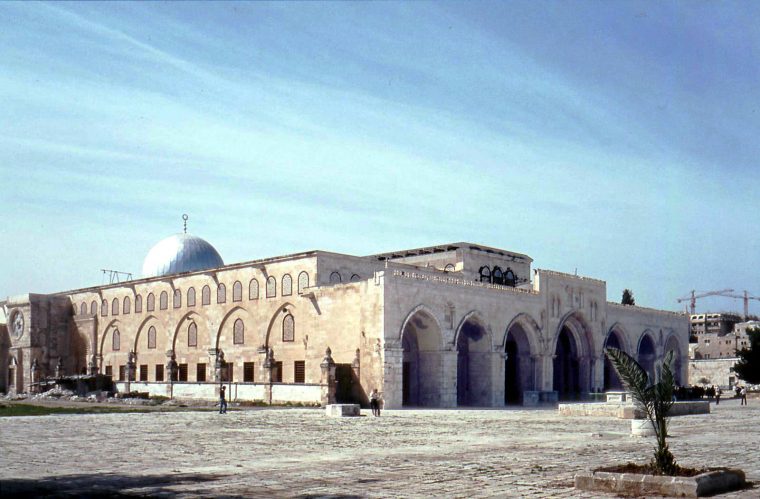 Masjid Al Aqsa in Jerusalem is the third Holiest site on the face of this planet for Muslims. It’s sanctity is so important in Islam that it is in fact mentioned by name in the Quran.

We have compiled a short list as to what makes this site so important for Muslims around the world.

1. It is the third Holiest site after the two Holy Sanctuaries in Makkah and Madinah.

2. It was the second house of prayer established on earth, built 40 years after the Kaaba in Mecca.

I asked the beloved Prophet Muhammad (pbuh) which was the first mosque on earth? ‘The Sacred Mosque (in Makkah),’ he said. And then which, I asked? ‘Masjid al Aqsa,’ he said. I further asked, what was the time span between the two? ‘Forty years,’ the Prophet [Alayhis salaam] replied. (Muslim)

3. It was the first Qibla (direction of prayer) in Islam. Muslims were commanded by God to turn in direction to this mosque in Jerusalem for prayer before the Kaabah in Mecca was declared as the Qiblah.

4. The Prophet Muhammad explicitly advised Muslims to visit this mosque and offer prayer in it.

“Set out deliberately on a journey only to three mosques: this mosque of mine (in Medina), the Sacred Mosque (in Makkah) and the Masjid Al Aqsa (in Jerusalem).”

5. Prayer in Masjid Al Aqsa will generate great blessings and worshipers will receive 250x the reward of prayer performed in any other location.

It was narrated that Abu Dharr (may Allaah be pleased with him) said:

6. It is the location that the Prophet was transported to during the miraculous Night Journey (Israa wa-Miraaj). Muslims believe Prophet Muhammad was transported from the sacred mosque in Mecca to the Masjid Al Aqsa during this miraculous night journey and then onto heaven.

“Glorified be He [Allah] Who did take His servant for a journey by night from Al Masjid Al Haram to Al Masjid Al Aqsa, whose precincts We did bless, in order that We might show him some of our Signs. Verily He is the All Hearing, All Seeing.” Surah Isra (17:1)

7. It was the location for the most extraordinary gathering in which the Prophet Muhammad (pbuh) led prayer in congregation with all previous prophets and then ascended to the heavens to receive God’s command to the Muslims to pray 5 times a day.

8. Muslims believe that the land of Jerusalem is the final resting place of many previous prophets and their companions including Prophet Ibrahim, Yaaqub and Ishaq and some close companions of the Prophet Muhammad (pbuh).