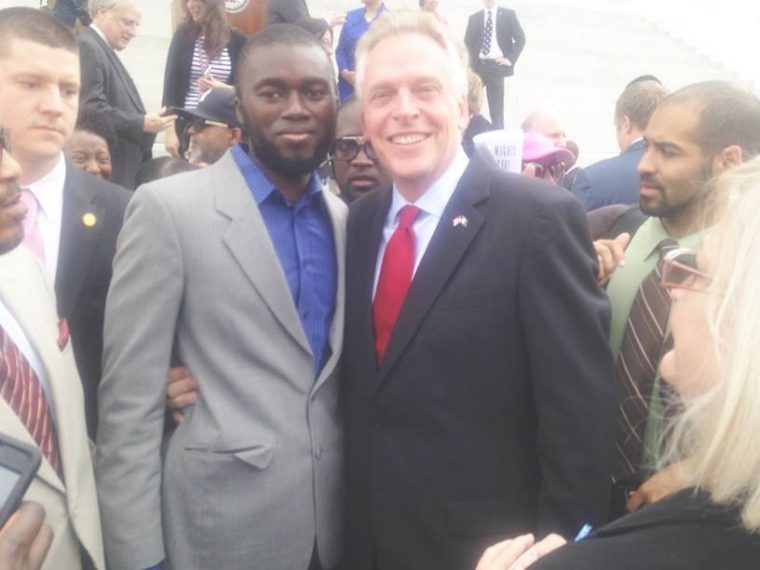 A local advocate for restoring voting rights to former felons, Mohamed B. Rahman, was invited to Gov. Terry McAuliffe’s announcement of his executive order restoring the civil rights of 206,000 former felons in Virginia on April 22. He may even have planted the idea.

“I have been engaged in community work on this issue for three years through the Islamic Circle of North America’s Virginia Chapter and through the local faith community, Ventures in Community, ” Rahman said.

“Through that work I met Rev. Keary Kincannon of Rising Hope Church, and Rev. Tuck Bowerfind of St. Luke’s Church, as well as Del. Paul Krizek and Sen. Scott Surovell.”

Rahman, a graduate of Walt Whitman Middle school and West Potomac High School, has an engineering degree and is on the board of the ICNA’s Virginia chapter located on Woodlawn Trail, just off Rte. 1.

Rahman said that as director of the ICNA Relief Chapter for DC, Virginia, and Maryland for five years (2011-2015), he was “exposed to people who are less fortunate and go through many struggles, one of which was the stigma of having a criminal record. Their families struggle too. We decided to focus on this along Rt. 1.”

After an initial meeting on the topic with Krizek and Surovell, who have worked on the issue for some time, Rahman was invited to a meeting in Richmond March 1 that included Secretary of the Commonwealth Levar Stoney, Sen. Adam Ebbin, Surovell, Krizek and staff from the governor’s office.

“We discussed voting restrictions and employment for people with criminal records,” Rahman recalled. “At the very end, they asked if I had anything else to say and I said, ‘How about just getting the Governor to do an executive order to restore voting rights to all prisoners who have served their time.’

The staff raised all these concerns about whether it was constitutional and how the Republicans would react.

“When I was invited to Richmond on April 22, I thought it would be another meeting. But I was surprised to find out when I got there that the Governor was issuing an executive order to restore the voting rights of all former prisoners.”

The executive order restored the rights to vote, serve on a jury, run for office, and become a notary public for any Virginian who has completed their sentence and any period of supervised probation or parole for a felony conviction as of April 22. The Governor will issue monthly orders covering anyone who qualified during the past month. The order does not change Virginia’s constitution which allows the current Governor to decide whether to restore the civil rights of those with felony convictions.

Governors Mark Warner, Tim Kaine, and Bob McDonnell took steps to shorten the wait time and simplify the form for requesting a reinstatement of voting rights, but each former felon had to apply individually. McAuliffe’s order eliminated the need for individual applications.

Former felons must still register to vote like any citizen.

Levar Stoney, who recently resigned as Secretary of the Commonwealth to run for mayor of Richmond, was a strong force behind the rights restoration order. Speaking at dinner at Tyson’s Corners Saturday Stoney revealed that he grew up watching his father, a former felon, struggle to get a job to feed and house the family, but being rejected by many potential employers because of this record. He noted that restoring peoples’ right to vote would help make them feel like citizens and part of the community again.

As he runs a small engineering consulting firm and applies to law schools, Rahman is pushing on to other issues “This restoration of voting rights was a major step, but much more work needs to be done on employment and housing,” he said.

Information on rights restoration is available at www.commonwealth.virginia.gov/ror.