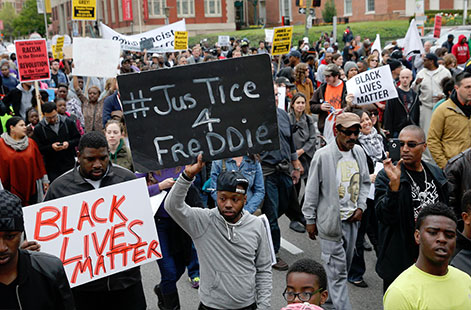 By Naeem Baig, President of ICNA

“Justice delayed is justice denied” rings true in my mind today as I think about Freddie Gray, his family, and the pain of the people of Baltimore.

It has been more than two weeks and the local police department has failed to provide a report regarding what happened to Gray. It is unacceptable that a young, healthy, 25 year-old man was brutally assaulted by the police, to the extent that his spinal cord was 80 percent severed. Gray went into coma and died a week after his injuries.

I hear the words of mothers about their sons saying, “I don’t want him to become the next Freddie Gray.” This is the everyday reality for the African American community and they are rightfully angry and afraid. We should never allow ourselves to be silent in a society where people fear the very people who are sworn to protect and serve them.

African American youth are repeatedly denied opportunities to realize their potential. We see the severe socioeconomic disparity, the structural inequality, and the racial targeting. We have seen this in Ferguson, in South Carolina, in New York, and in numerous other places across the country. If not for videos put online, we would have been unaware of what atrocities our brothers in humanity endure, and no one would have stood against these crimes.

There is a problem with color in our country. There is a problem when law enforcement officers are prejudiced against minorities and abuse them. Police violence only gets worse when compounded with racial inequality and poverty. We must all stand up and say enough is enough.

The call for nonviolence by the state as it continuously inflicts violence on its citizens is hollow. While we do not condone the destroying of property, or harm of any kind, neither can we condemn the protestors who are fed up with police brutality and sick of living cautiously in fear. We value the sanctity of life. We must demand justice. This is our right. We must not stop agitating for truth and asking important questions.

As American Muslims, we know firsthand what it feels like to be targeted and criminalized in the name of the war against terror. Local and federal law enforcement targets our community solely because of our faith. American Muslims are now facing unending prejudice and harassment, and it would be a disservice to our community, to the African American community, and to America, if we do not stand with those who have been fighting this injustice for centuries.

As our annual convention comes close, we are proud to host it in the city of Baltimore, where people of conscience are rising to demand justice. We are proud to host it in a city of Americans that are standing to uphold their rights, and the right of all Americans. What happened in Baltimore affects us all. What happened in Ferguson affects us all. This is about justice. This is about seeing every American as a human. This is what we stand for at ICNA.